Over a three year programme on five properties the aim was to lift the sheep enterprise performance by $12 per ewe mated based on original meat and wool prices. The final result? An average income across the properties of $13.30 per ewe.

We are proud of our efforts over the years working with farmers to ensure a long-term overview provides enduring productivity and profit. But you shouldn’t just take our word for it. Here are some of the key facts and figures that show where we work – and the results of these efforts.

Improvements in flock and herd performance does not necessarily involve making big changes. It is invariably about making lots of small management improvements.

This study is about a flock of relatively high performing ewes where for financial reasons the owners desperately needed to improve performance further to be confident that they could continue farming.

After a year of accurate record keeping and StockCare® analysis of the data we had a good idea of how they were performing and in what direction they should go to improve performance.

While the lambing percentage was above average and the lamb growth rate was among the top performers there was room for better ewe performance. Ewes were mated at high weights but the kg lamb weaned per ewe mated and the % of ewe weight weaned was only a little above average.

An analysis of the scanning data revealed that while the MA ewes were mated at very good weights (68kg) the 2Ts were light at 55kg. Neither the MA ewes nor the 2Ts had a good scanning index. The percentage of dry ewes in the 2Ts was very high. These findings suggested that management of the hoggets needed to be looked into as did ewe management over the mating period.

Replacement ewe lambs soon after weaning were managed on a run off where it was difficult to keep a good check on them. Although the feed quality including brassica crops appeared to be adequate, for various reasons including parasitism and Vit B 12 deficiency, they were not performing. The most important issue however was that they were not being monitored closely and the first post weaning weight was not done until May when they were found to be well behind their target weights. (Fig 3.) Closer monitoring would have revealed their poor growth rates and stimulated some action. As a result they never reached their target 2T mating weight. 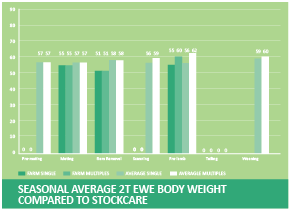 By weighing the ewes it could be determined that both the 2Ts and the MA ewes, but especially the 2Ts, had lost weight between joining and ram removal. (Fig 4) This would have been the most likely reason for the poor scanning indices and along with some very light 2Ts the main cause of the high % of dry 2T ewes.

The performance of the flock with respect to lamb and ewe survival was very good with only an11% lamb mortality. While the ewe mortality was acceptable at 4.3% there was room for improvement. In the owners opinion there had been too many deaths from bearings. However lamb survival was not the main area where we needed to direct our efforts. It was in improving the scanning % and the lamb growth rates to weaning.

Numerous small changes to management were put into place over the next four years. Some of the more important management changes included.

After one year the lambing % had improved from 133% to 145% where the owners were happy to sit. They have continued to maintain a lambing % around this value because they know what they have to do to ensure they reach their target scanning % as well as what they have to do to maintain their excellent lamb survival. After four years lamb growth rates have improved by 37g/day. While this might not seem a huge gain it has still meant that along with the improved lambing % each ewe weaned an extra 10kg of lamb. This was achieved without lifting the mating weights.

Overall flock production improved significantly over the four years 2006-2009. While ewe numbers remained the same at around 1700, the total Kg of lamb weaned had improved by 20 tonne in the 4th year. The total extra production over the four years was around 36,000kg.This gain in Kg lamb weaned being worth an extra $90,000 and was achieved without any significant financial input.